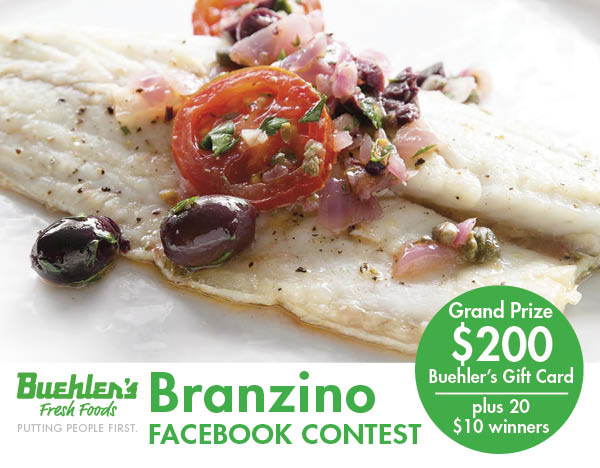 Here’s how to enter:

Here’s how the winners are chosen:

No purchase necessary to enter or win. A purchase will not increase your chance of winning. Void where prohibited by law.

Who may enter: The Contest is open to legal U.S. residents 18 years of age or older.

How to Enter: To enter, prepare Branzino – Mediterranean Sea Bass – using your favorite recipe – or be creative and make up an original recipe. Post a photo of your Branzino dish with #BuehlersBranzino on Buehler’s Facebook Timeline. You must also “Like” Buehler’s Facebook page. Include a brief description of your recipe with your Facebook post.

Photos deemed by the Sponsor to be inappropriate will be eliminated from the contest entirely at the discretion of the Buehler’s Fresh Foods (the “Sponsor”).

All Entries, once submitted to the Contest, become the property of the Sponsor. The Sponsor reserves the right to use the information as the Sponsor deems appropriate.

Prize: The first 20 people to post photos of their Branzino dishes, following the rules above, will receive a $10 Buehler’s Gift Card. (Limit: $10 Gift Card per person.)

Grand Prize: The person whose qualifying #BuehlersBranzino post that has the most “Likes” on May 1, 2017 at 9:00 am ET will be the grand prize winner and will receive a $200 Buehler’s Gift Card. In case of a tie, one random winner from the top entrees will be drawn.

Winners and Grand Prize Winner: Winners will be announced on Buehler’s Facebook page. Prizes must be claimed within 72 hours of notification, or the winner forfeits their prize and a new winner will be chosen.

By entering the contest, entrants grant the Sponsor the right to publish their entry photos.

By participating, entrants agree to be bound by these Official Rules. All taxes, including federal, state, and local taxes, are the sole responsibility of the winner.

Conditions: All entries to the Contest become the property of the Sponsor and will not be returned. Sponsor is not responsible for lost, late, misdirected, damaged, forged, mutilated, incomplete, illegal, or illegible entries.

This promotion is in no way sponsored, endorsed or administered by, or associated with Facebook. You understand that you are providing your information to Buehler’s and not to Facebook. All entrants will be subject to Buehler’s Privacy Policy: https://www.buehlers.com/legal-disclaimers/