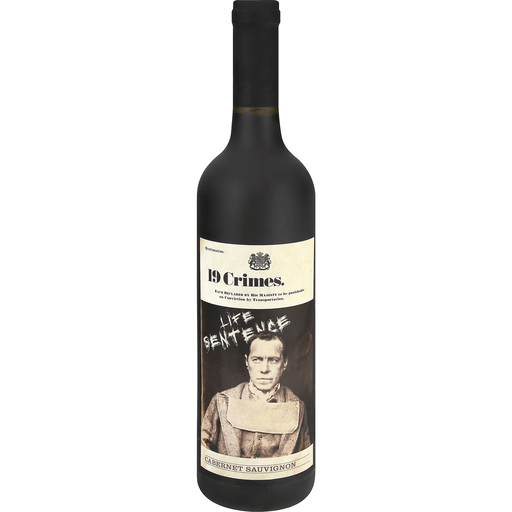 Each declared by his majesty to be punishable on Conviction by Transportation. South Eastern Australia, Aus. Nineteen Crimes turned convicts into colonists. Upon conviction, British rogues, guilty of at least one of the 19 crimes, were sentenced to live in Australia, rather than death. This punishment by transportation began in 1788, and many of the lawless died at sea. For the rough-hewn prisoners who made it to shore, a new world awaited. As pioneers in a frontier penal colony, they forged a new country and new lives, brick by brick. This wine celebrates the rules they broke and the culture they built. Download our Living Wine Labels AR app (hashtag)talkingbottles. Contact us with questions or comments at 888-544-3223. 13.5% alc./vol. 26 Imported and bottled by TWE Imports, Sonoma, CA. Produced by 19 Crimes, 97 Sturt HWY, Nuriootpa SA 5355 Australia. Wine of Australia.