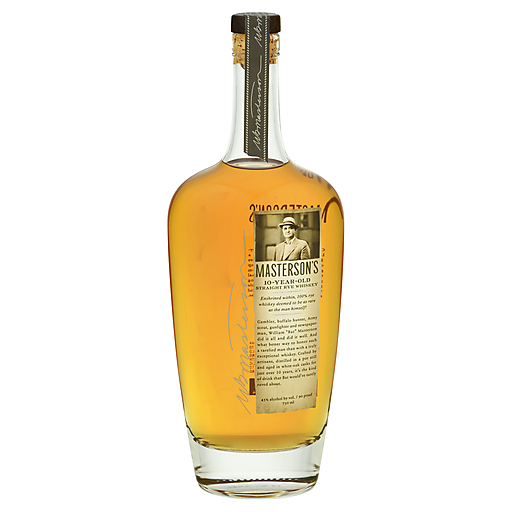 10-year-old. Enshrined within, 100% rye whiskey deemed to be as rare as the man himself! Gambler, buffalo hunter, Army scout, gunfighter and newspaperman, William Bat Masterson did it all and did it well. And what better way to honor such A rarefied man than with a truly exceptional whiskey. Crafted by artisans, distilled in a pot still and aged in white-oak casks for just over 10 years, it's the kind of drink that Bat would've surely raved about. Bat Masterson may have been a gambler, but he would've never taken risks with the quality of his whiskey. Crafted in small batches by whiskey-loving artisans, Masterson's is a 100% rye whiskey that incorporates only the most fragrant and plump grains of rye, glacial water from the Northern Rockies, a traditional pot still and a 10-year, oak aging process. The result, a remarkable whiskey with a trace of pepper and spice, along with a subtle sweetness. 3 Badge Mixology. 3badge.com. 45% alcohol by vol. 90 Imported & bottled by 3 Badge Beverage in Fairfield, CA. Product of Canada.