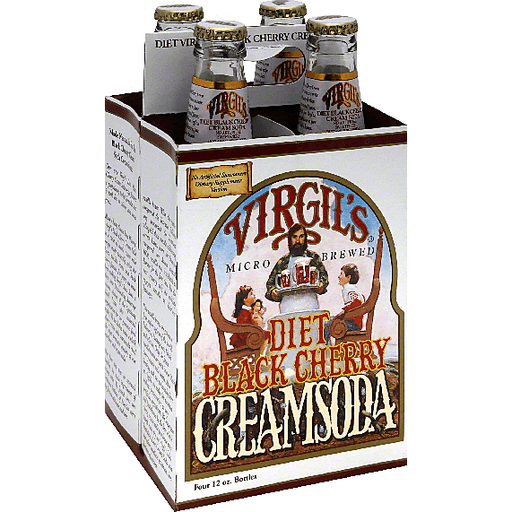 Dietary supplement version. Micro brewed. No artificial sweeteners. Made Naturally for the Black Cherry Cream Soda Connoisseur. Our new Virgil's Diet Black Cherry Cream Soda recipe features a proprietary herbal formula that is both low in calories and tastes great. Black Cherry Cream Soda History: Virgil's Black Cherry Cream Soda is a twist of classic cream soda recipe made naturally using the finest vanilla beans and black cherry flavors. For years, we have been making Virgil's Root Beer, a three time Outstanding Beverage Award winner of the Specialty Food Trade (the national organization for the gourmet food trade). We decided to make a black cherry cream soda that would rival the super premium quality of our root beer and cream soda. Our first step was to research vanilla, the main ingredient of cream soda. We found that the Totonaco Indians of Mexico were the first to cultivate and use vanilla beans. When the Aztecs conquered the Totonaco Indians they demanded the Totonaco relinquish their vanilla cultivating secrets. Later, when the Spanish conquered the Aztecs around 1600, vanilla was introduced to Europe for the first time. For the next century only the nobility enjoyed vanilla in delicious beverages. Now vanilla beans are grown in four major regions of the world: Indonesia, Madagascar, Tahiti, and Mexico. Only the finest vanilla beans are used in our black cherry cream soda recipe. Also, keeping with our philosophy here at Virgil's, we make this product without preservatives or any artificial ingredients. We hope you will find this to be the best black cherry cream soda you have ever tasted. Contains no preservatives and no caffeine. Gluten free.