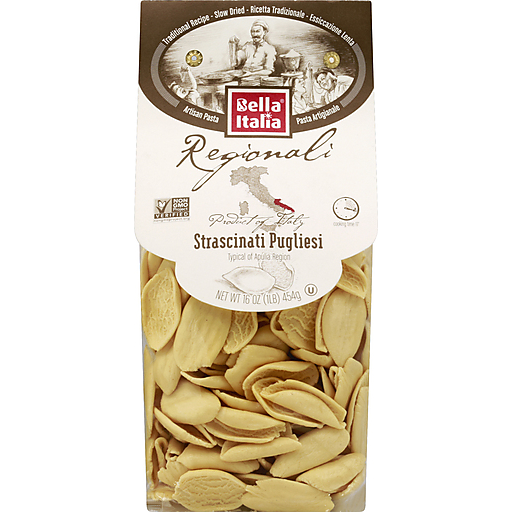 Traditional recipe. Slow dried. Artisan pasta. Typical of Apulia Region. Bella Italia Regionali is a unique line of artisan products that represents the ancient culinary traditions of Italy's 20 regions (scan the QR code to get more info). Thanks to the slow drying process of the pasta, it conserves unsaturated not only the nutritional factors, but even the essence taste and flavor. Strascinati are typical of Apulia and this particular cut is made by following ancient recipes that calls for dragging small pieces of dough by hand, which is also where its name derives from. In the city of Taranto and the Itria Valley, they are also known as Chiancarelle, Fiaffioli or Facilleti. This pasta is so cherished in the region that the ton of Latiano hosts an annual festival called Stacchioddi. Although currently associated with Apulia, Strascinati were most likely created in the South of France during the middle age. The story goes that large amounts of similar pasta were loaded onto ships that were preparing to travel long distances. Eventually the old recipe arrived in Apulia and was renamed Strascinati by the Angioini, the dynasty that ruled in the thirteenth century. According to extensive research done on Aplian food and wine, Strascinati originated in the Sannicandro di Bari territory during the rule of the Norman-Swabian between the twelfth and thirteenth century. Strascinati are ideal with vegetables like broccoli and fish-based sauces. (Source: Mediterranean Institute of Culinary Arts). Non GMO Project verified. Nongmoproject.org. bellaitaliaproducts.com. agritalia.com. FSC: Mix- Packaging from responsible sources. www.fsc.org. Product of Italy.