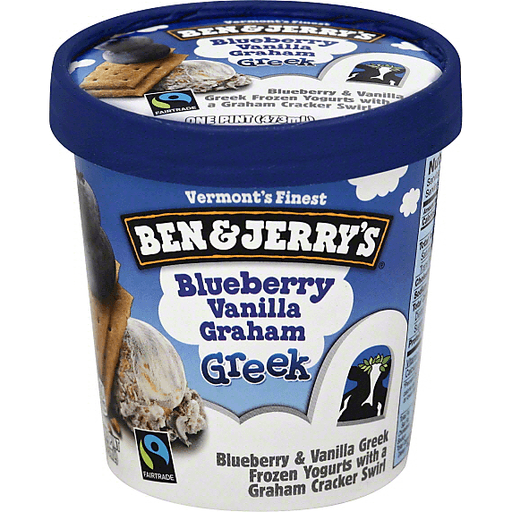 Ben & Jerry's® Blueberry Vanilla Graham Greek Frozen Yogurt. Still a pint! Fairtrade®. Blueberry and vanilla Greek frozen yogurts with a graham cracker swirl. Sweet Eureka! It's our most epic fro yo yet, & it's uniquely Greek! Made with real Greek yogurt, it's all the creamy richness of Greek yogurt, and Ben & Jerrily loaded with all the flavor boldness and fun swirls you'd expect. We think it's really Greekin' good & it'll pretty much rock your acropolis. All sugar and vanilla in the frozen yogurt base is traded in compliance with Fairtrade standards, total 38%, excluding liquid ingredients. Visit www.info.fairtrade.net. We're still working to convert the Ben & Jerry's chunks and swirls you love, to be Fairtrade. The family farmers who supply our milk & cream pledge not to treat their cows with rBGH. The FDA has said no significant difference has been shown & no test can now distinguish between milk from rBGH treated & untreated cows. Not all the suppliers of our other ingredients can promise that the milk they use comes from untreated cows. FSC®. Your satisfaction guaranteed or your money back. Please send container bottom, place & date of purchase, & specific details. *With live and active cultures. www.benjerry.com. Cows: ©Woody Jackson 1997. ©Ben & Jerry's Homemade, Inc. 2013.