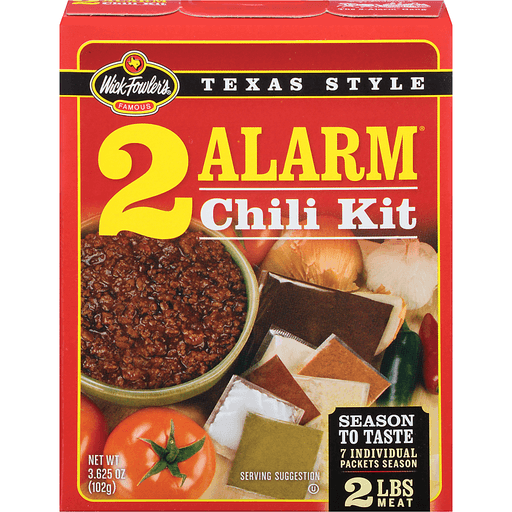 All natural. 7 Packets allow you to season to taste 2 lbs of meat. Contains: salt, onion/garlic, chili pepper, cayenne pepper, cumin/oregano, paprika, masa. In 1967, Wick Fowler defended the honor of Texas-style chili at the first championship chili cook-off, using the same recipe that goes into his 2-Alarm Chili Kit. His recipe won the World Chili Championship. Seasoned chili fans appreciate the full warmth of his recipe, but Wick knew others like less spice, so he built into his kit a way to adjust the heat. Put in half the red pepper packet in the kit for 1-Alarm taste, use it all for original 2-Alarm, or leave it out for milder chili. For 3-Alarm Chili or hotter add additional red pepper. World champion chili. Season 2 pounds.