Who loves seafood? Buehler’s does! Our Seafood Department sources fresh seafood from around the world! We invite you to stop by and see the latest catches!

At Buehler’s you’ll find everything from salmon and shrimp, to crab legs and fresh lobster, trout, tilapia, and ocean fish ….. There are so many choices…What are your favorites?

Our friendly, knowledgeable staff will be happy to answer your questions and share tips for preparing seafood.

We carry a variety of sizes of shrimp – both fresh and frozen.

Cod is always popular in Ohio.

Tilapia and trout are also popular choices… along with perch, salmon, and so many more!

We also carry ocean fish – such as orange roughy, Mahi Mahi, shark and swordfish. You might find squid and shark in our cases!

Looking for something even more unique? Just ask, we can probably order it for you!

Oysters – whether fresh on the half shell – or deep fried – are delicious.

Crab cakes or crab legs…. what’s your preference. We carry both! We also offer a wide variety of frozen fish and seafood, with some selections already packaged, ready to cook!

Fresh lobsters are ready for you to take home! And our scallops are a favorite in the seafood department.

Have you ever tried a clam bake? It’s actually quite easy! Every autumn Buehler’s has Clam Bake Season Specials! Ask about them at your local store.

Check our circular for this week’s seafood specials.

Oceans of Information about Seafood

We love talking about Seafood! So stop by our Seafood Department for recommendations and tips! Or check the Seafood Handbook for nutritional information, recommended cooking techniques, and much more about your favorite seafood.

It’s simple to participate! Simply round up your purchase to the next dollar and donate your change to tackle hunger. Your donation will benefit the Akron-Canton Regional Food Bank… and in turn… your local Food Banks.

Please join us as we do our part to tackle hunger in our communities. 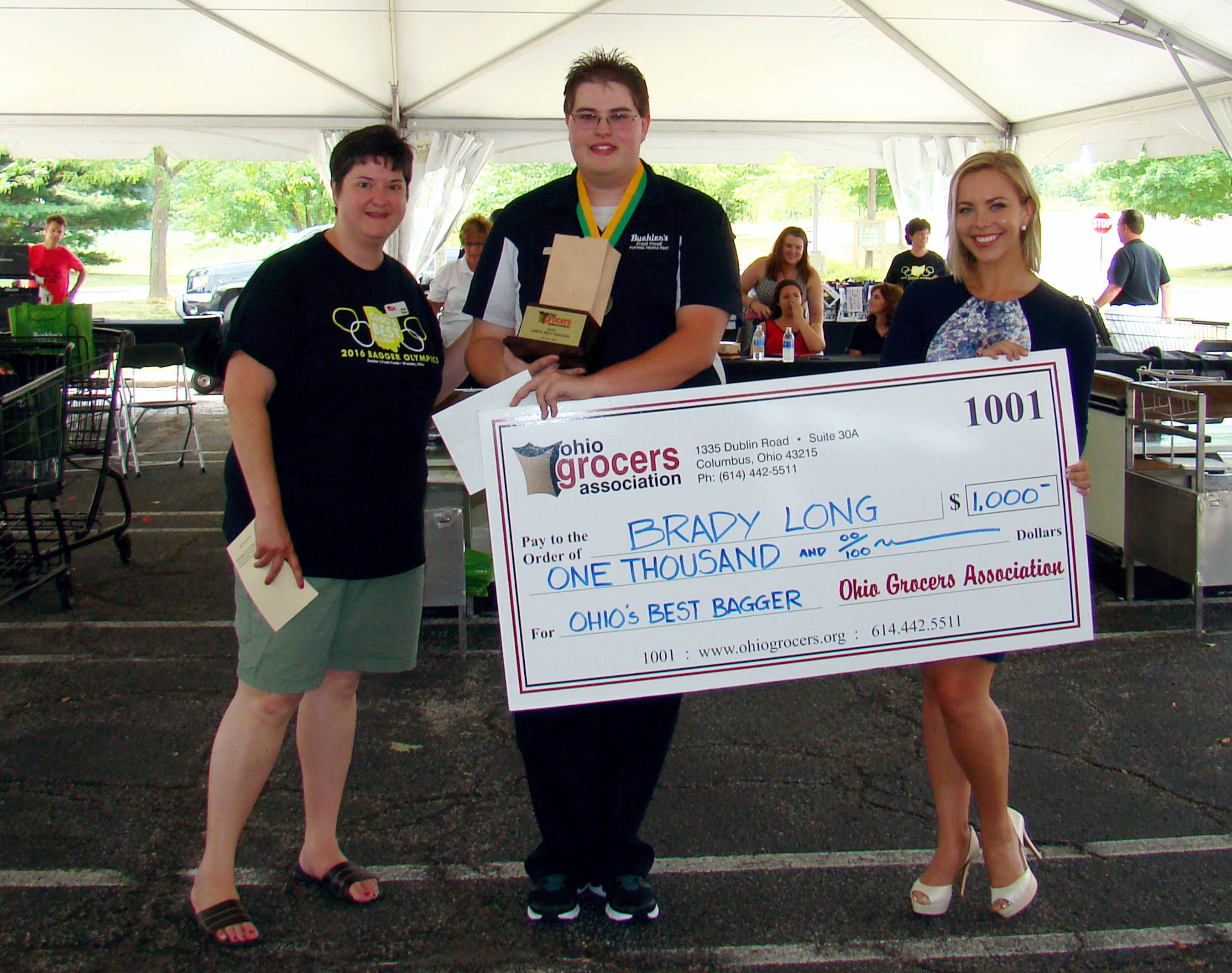 Brady Long, representing Buehler’s Fresh Foods Medina Forest Meadows, has repeated as Ohio’s Best Bagger at the 2016 Ohio Best Bagger Contest on Tuesday, August 8, 2016. Brady won the contest in 2015, and has reclaimed the title in 2016. The Ohio Grocers Association event featured regional winners from Ohio supermarkets and was hosted at the Buehler’s Milltown location in Wooster, Ohio.

“We are thrilled to have Brady represent our state again as Ohio’s Best Bagger,” stated Kristin Mullins, President and CEO of the Ohio Grocers Association. “Brady encapsulates what it took to be crowned Ohio’s champion and we look forward to rooting him on at the National Grocers Association Best Bagger Championship in February of next year.”

Brady beat 14 competitors to win the coveted title, including fellow co-workers Evan Lambert, Logan Haid and Jacob Lustig. The award comes with a $1,000 check, and a trip to Las Vegas to compete in the National Grocers Association Best Bagger Championship in February 2017. Special guest of honor, Sarah Hider, former Miss Ohio of Wooster, sang the National Anthem and competed as a “celebrity bagger.”

Dan Shanahan, Buehler’s President and COO stated, “Congratulations to Brady for a remarkable repeat performance as Ohio’s Best Bagger! Brady daily demonstrates the qualities of an outstanding employee and has a keen awareness of customer service. We will be cheering him on at the national competition in Las Vegas.”

Buehler’s Fresh Foods philanthropy partner, the Akron-Canton Regional Food Bank, also benefited from this event. The non-perishable foods used as part of the bagging competition were donated to the Food Bank, as well as all ancillary food.

Contestants are judged not only on speed, but also on weight distribution between bags, correct bagging technique, professional appearance and attitude. The best bagger contest is an exciting competition, which serves as a way to enhance proper and effective bagging techniques, as well as a prime opportunity to showcase talented employees.

Buehler’s Fresh Foods announced their goal to transition to a 100 percent cage-free egg supply chain by 2025. The egg industry, nationwide, has set this goal considering supply, affordability and customer demand.

• the addition of cage-free chickens to the Dalton farm

By the end of 2016, Buehler’s will offer customers a “Buehler label” cage-free egg product.

Current specialty or premium eggs sales at Buehler’s account for about one-third of total egg sales, including:

Hillandale Farms is one of the nation’s leading supplier of shell eggs to retailers and distributors throughout the United States.

Hillandale Farms has a wide selection of butter, cheese and meats to complement their offering of eggs.

For quality egg programs tailored to meet the needs of customers, look no further than Hillandale Farms.

E & H Family Group is a family owned company committed to environmentally responsible behavior, local sourcing of product and supporting the communities in which we operate.  For more information visit www.buehlers.com