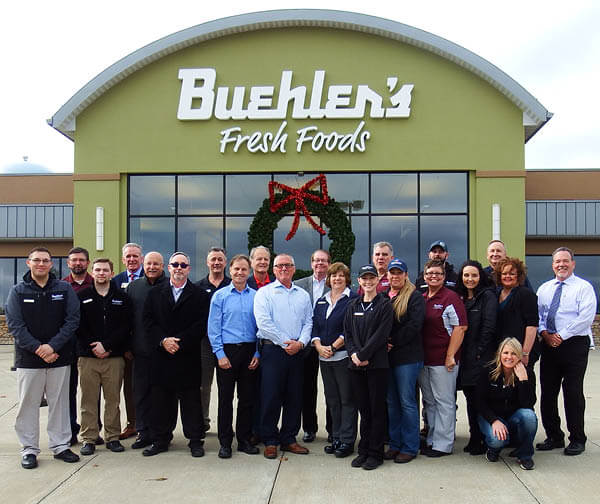 Buehler’s officers, directors and staff all played an important role in the local grocery winning the Ohio Grocer Association’s highest honor of the year – the Pinnacle Award.

The Ohio Grocers Association (OGA) recently announced that Buehler’s Fresh Foods has been selected as the winner of this year’s Pinnacle Award. The OGA award is based on overall excellence in retail operations, and is  the highest award given by the Ohio Grocers Association. The Pinnacle Award is given annually to both a small and large operation, recognizing exceptional creativity, merchandising, innovation, human resources, community relations and overall successful operations.

Expressing his gratitude in Buehler’s being selected for this honor, Dan Shanahan, President & CEO of Buehlers, stated,  “On behalf of all our employees we are very thankful to receive this year’s Ohio Grocers Association Pinnacle Award for Large Operators. We are great admirers of Kristen Mullins, her team and the job they do for Ohio grocers which makes this award even more meaningful.”

Kristin Mullins, President/CEO of the OGA says of the Wooster-based grocery, ““Every year, OGA’s Pinnacle Award Selection Committee chooses two companies (one small operator and one large operator) to recognize as an outstanding retail organization.  Recipients are outstanding in every way – from operations to community involvement to everything in between; and no one exemplifies this more than the Buehler organization.  The Ohio Grocers Association is so pleased and honored to have this organization not only as a part of Ohio’s grocery industry but as a member of our organization as they are an outstanding example of excellence and are so deserving of this recognition.”

The award will be officially presented to Buehler’s at the Ohio Grocers Association Annual Ohio Brown Bag Celebration this spring.

Buehler’s Fresh Foods is committed to environmentally responsible behavior, local sourcing of products, and supporting the communities in which we operate. For more information  visit www.buehlers.com.